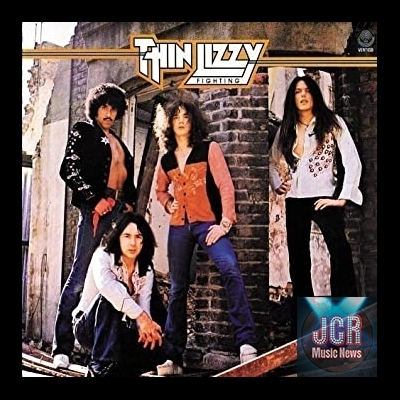 It's hard not to interpret the 'fighting my way back' chorus of the title track on Thin Lizzy's fifth album as the band's way of bouncing back from the uncommonly subdued Night Life. If that record was smooth and relaxed, Fighting is a tense, coiled, vicious rock & roll album, as hard as Vagabonds's toughest moments but more accomplished, the sound of a band truly coming into its own. There are two key forces at work. First, there's the integration of guitarists Scott Gorham and Brian Robertson, who get to unleash furious playing on every track here. It's hard not to thrill at their harmonizing twin-lead interplay, which is enough to excuse the rather pedestrian nature of their original tunes here (Robertson penned the boogie 'Silver Dollar,' Gorham the closer 'Ballad of a Hard Man'). That's especially true because of the other development here: the full flourishing of Phil Lynott as a rock & roll poet. Whether he's writing hard-charging rockers like 'Wild One,' jazzy Springsteen-isms of 'For Those Who Love to Live' or combining both on 'Freedom Song,' his songs manage to be both mythic and commonplace, and when delivered by the vital, visceral lineup he has here, they're invigorating. Strangely enough, that leap forward as a writer is somewhat overshadowed by a triumph of the band, in how they completely steal Bob Seger's 'Rosalie' turning it into their own anthem, but that again is a testament to the strength of this incarnation of Thin Lizzy, who truly begin their classic era with this dynamic LP.