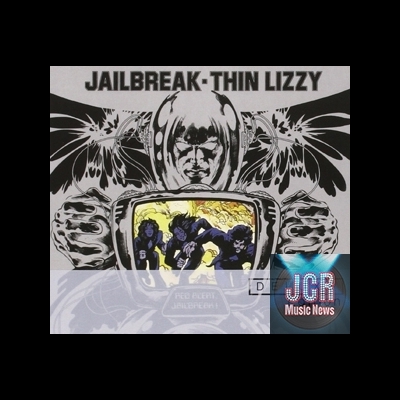 Thin Lizzy found their trademark twin-guitar sound on 1975's Fighting, but it was on its 1976 successor, Jailbreak, where the band truly took flight. Unlike the leap between Night Life and Fighting, there is not a great distance between Jailbreak and its predecessor. If anything, the album was more of a culmination of everything that came before, as Phil Lynott hit a peak as a songwriter just as guitarists Scott Gorham and Brian Robertson pioneered an intertwined, dual-lead guitar interplay that was one of the most distinctive sounds of '70s rock, and one of the most influential. Lynott no longer let Gorham and Robertson contribute individual songs -- they co-wrote, but had no individual credits -- which helps tighten up the album, giving it a cohesive personality, namely Lynott's rough rebel with a heart of a poet. Lynott loves turning the commonplace into legend -- or bringing myth into the modern world, as he does on 'Cowboy Song' or, to a lesser extent, 'Romeo and the Lonely Girl' -- and this myth-making is married to an exceptional eye for details; when the boys are back in town, they don't just come back to a local bar, they're down at Dino's, picking up girls and driving the old men crazy. This gives his lovingly florid songs, crammed with specifics and overflowing with life, a universality that's hammered home by the vicious, primal, and precise attack of the band. Thin Lizzy is tough as rhino skin and as brutal as bandits, but it's leavened by Lynott's light touch as a singer, which is almost seductive in its croon. This gives Jailbreak a dimension of richness that sustains, but there's such kinetic energy to the band that it still sounds immediate no matter how many times it's played. Either one would make it a classic, but both qualities in one record makes it a truly exceptional album.