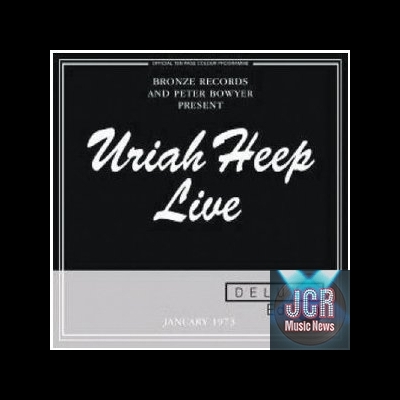 After scoring back-to-back album hits with Demons and Wizards and The Magician's Birthday, Uriah Heep had suddenly become a major attraction in the world of rock & roll. They capitalized on their newfound popularity with extensive touring and, since they lacked the time in their schedule to knock out a new studio album, their label decided they should release a live album to fill the gap. The result was Live: January 1973, the definitive live recording of the classic Uriah Heep lineup and a good indication of what made the group so popular among heavy metal fans during their heyday. The set list represents all the highlights of their albums up to the point, and everything is delivered with maximum energy before an enthusiastic Birmingham, England, crowd. Of course, uptempo rockers like 'Traveller in Time' and 'Love Machine' become especially muscular in this setting, but the big surprise is the way the slower tunes are affected. For instance, 'July Morning' gains a new, profound level of emotional power as the band shifts from pastoral verses backed only by Ken Hensley's organ riffs to a stirring chorus where the band members give their all before giving way to some powerful instrumental jamming. The band also pays tribute to its roots at the end, with an entertaining medley of classic rockers like 'Roll Over Beethoven' and 'Blue Suede Shoes.' Unfortunately, Live: January 1973 is also prone to the bombast and self-indulgent soloing usually present on double live albums: The big culprit in this area is 'Gypsy,' a rocker that is padded out to over twice its studio lengthy with lengthy instrumental solos that were probably more impressive in the live setting than they are on record. However, the group makes up for this deficiency by supplying a surprisingly sturdy set of tunes and delivering a totally committed performance throughout. In the end, Live: January 1973 probably won't win over any new converts to the Uriah Heep cause, but it is a solid listen for the group's fans.