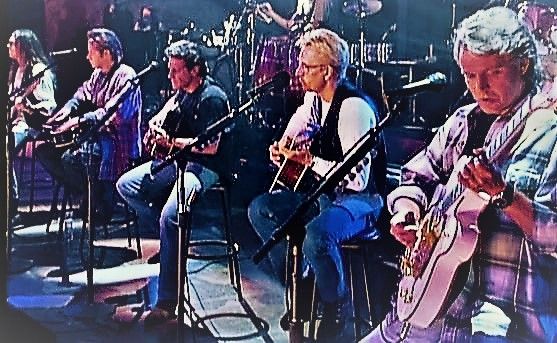 STUNNING 1994 RADIO BROADCAST RECORDING FROM THE REUNITION TOUR The Eagles' first reunion tour was a major shock to music fans who never thought they would play together again. But their next step was more in line with what every other band has done in such a situation. On Nov. 8, 1994, they released Hell Freezes Over. The initial end of the Eagles came with an epic meltdown at a show in Long Beach, CA. - often referred to as the "Long Night at Wrong Beach" - on July 31, 1980, when Don Felder and Glenn Frey almost came to physical blows. Frey took issue with Felder's reply to Sen. Alan Cranston with, “You’re welcome … I guess,” after Felder was thanked for agreeing to perform a show in Cranton's honour. Though they kept it quiet for many months afterward, the Eagles were done. Don Henley was categorical, citing the old adage that the band would get back together "when hell freezes over But four months after appearing in the video for Travis Tritt's cover of ‘Take It Easy,’ Henley, Frey, Felder, Joe Walsh and Timothy B. Schmit agreed to perform live together for the first time in 14 years. A film studio in Burbank, Calif., was booked and over two days in April 1994, the Eagles recorded an MTV special, which resulted in the 11 live tracks found on Hell Freezes Over. The album contained fresh takes on their classics, which included recasting ‘Hotel California’ with acoustic guitars and Latin percussion. But the icing on the cake was the inclusion of four new studio songs. Ultimately, Hell Freezes Over sold more than nine million copies, and the video, which had live versions of the new songs, racked up an extra 800,000 The tour, which began a month after the special was recorded, ended up becoming one of the most notable and financially successful in the history of rock music. Over three years, from 1994-96, the Eagles played 160 shows across the world, setting box office records at nearly every stop along the way. n 24th August ‘94, the group were on the East Coast and performed one of their finest shows of the entire tour at Giants Stadium, in East Rutherford, NJ, playing a quite stunning set which was broadcast across local FM radio, allowing those fans unable to get a ticket to tune in and hear the gig live. This 2CD set now features this superb concert in its entirety, released here for the first time.