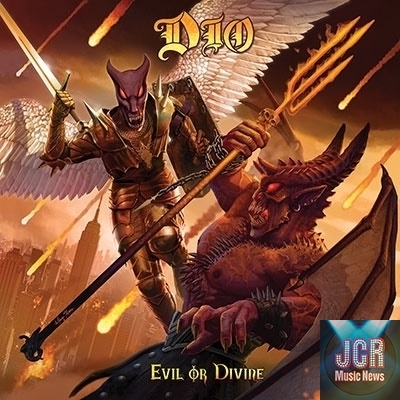 Ronnie James Dio is an absolute figure in the metal world. The singing and expressive power of the masterpiece like the demon god still surpasses everything. It's been 10 years since the great vocalist Ronnie James Dio went out of this world. Two live albums containing his best performances of the 2000s are back here as media book specification 2CD editions with the latest remastered! "EVIL OR DIVINE: LIVE IN NEW YORK CITY" which recorded the pattern of the live held in New York in 2002! It is an appearance in the complete version that additional recording of the sound source of two songs that were not included in the CD at the time of release in 2005! Ronnie James Dio is a great vocalist and the guru of heavy metal. In May 2010, he, who was known as the godfather of the metal world, had a great influence on the metal scene with his expressiveness and overwhelming singing ability. In 2020, the 10th anniversary of his death, four albums he released as Dio between 1996 and 2004 were revived as the latest remastered sound source, followed by two famous live albums containing the live performances of the 2000s! The live albums that will be revived as the latest remastered sound sources are "EVIL OR DIVINE: LIVE IN NEW YORK CITY" released in 2005, which includes the pattern of the 2002 New York performance, and "HOLLY DIVER LIVE", released in 2006, which includes a complete reproduction tour of the historical masterpiece "HOLLY DIVER" in Astoria in 2005. Both works are newly jacketed according to this re-issue, and a design that splendidly expresses Dio's world view is adopted, and it will be released in three forms: a two-disc CD with a media book specification, a limited edition 3-disc analogue that adopts a 3D jacket, and a regular board 3-disc analog. Each CD is a two-cd package with the same luxury media book specification as before, and "EVIL OR DIVINE: LIVE IN NEW YORK CITY" will be released in the full version, which includes two additional songs that were included in the DVD released in 2003 but were cut at the time of the CD release in 2005. EVIL OR DIVINE: LIVE IN NEW YORK CITY ( 2005 ) A live album that includes performances at roseland ballroom in New York in December 2002 from the tour accompanying the 2002 album "KILL THE DRAGON". It was first released as a video work in 2003 and released as a CD in 2005, and two songs were cut when it was released as a CD, but in this re-issue, "Lord of the Last Day" that had been cut and Simon Wright's masterpiece drum solo were added to cover the recorded songs that should be called the full version. It's a gem where you can enjoy a mature and awesome dio performance, and you'll also be listening to Doug Aldrich's tremendous guitar play.