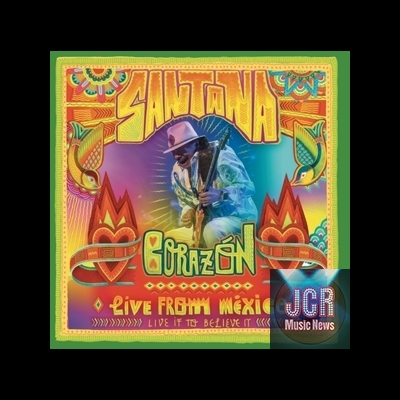 Corazón - Live From Mexico: Live It To Believe It ( + DVD)

Ten time Grammy-Award winner Santana presents “CORAZÓN, LIVE FROM MEXICO: LIVE IT TO BELIEVE IT”, a special CD/DVD concert event. The DVD includes  the concert film, and a “making of the concert” 30 minute documentary shot in Puerto Vallarta, Riviera Nayarit, and Guadalajara (“Live It To Believe It”) and the accompanying CD is the live audio from the event.

Combined with 40 years of hits, Santana performed many of the songs from his double-platinum US Latin-certified and critically-acclaimed album CORAZÓN at a once in a lifetime concert event in December 2013, accompanied by many of his album special guests, all celebrating their Latin music heritage in Guadalajara, Mexico (in his native state of Jalisco). The CORAZÓN project brought Carlos back to his birthplace and celebrates Carlos’ love of his musical heritage, as well as showcases Carlos’ own personal influence on Latin music and on today’s generation of Latin superstars. Superstar guest performers who joined Santana at the concert  event captured on this CD/DVD include Elan Atias, Chocquibtown, Lila Downs, Gloria Estefan, Juanes, Miguel, Fher Olvera (of Maña),Niña Pastori, Samuel Rosa (of Skank), Cindy Blackman Santana,  Salvador Santana, Romeo Santos,  Soledad, and Diego Torres.