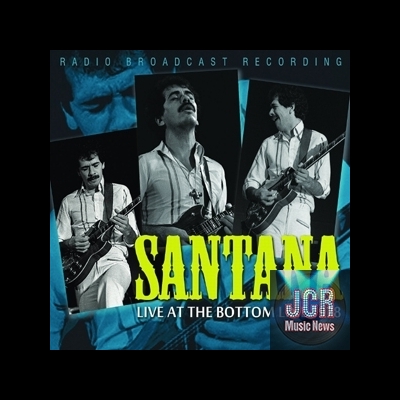 Santana burst into the public consciousness via their riveting performance of the Latin/Rock fusion Soul Sacrifice, at the August 1969 Woodstock festival. Courtesy of their appearance at that legendary event, Carlos Santana (high on mescaline at the time) and his band were almost instantly propelled from cult status into the wide blue yonder of Rock superstardom! The band's eponymous - and largely instrumental - debut album was fortuitously issued just a few days after their Woodstock appearance and, such was Santana's momentum, the album shot up to reach number 4 on the Billboard chart! Taken from the album, the single Evil Ways also made the US Top 10. Not bad for a band that had only formed a couple of years earlier, in San Francisco, as the Carlos Santana Blues Band. But this sublime collective were no fly-by-night one-hit-wonders and they capitalised hugely on their early success during the 1970's. By the time this concert was broadcast, from New York's intimate but mythical Bottom Line club, in October 1978, Santana were internationally renowned and had released a string of highly acclaimed and successful records. The release they were promoting at this time was their ninth, 'Inner Secrets' (released the same month) which is heavily featured herein with live versions of four tracks; a cover of Buddy Holly's Well Alright (also popularised by the Eric Clapton-led supergroup Blind Faith), Dealer/Spanish Rose, One Chain and Open Invitation. One Chain was huge single in the USA, while Well Alright was a surprise Top 40 hit when it was issued in the Netherlands! The wide-ranging set also encompasses Santana's very first hit single, Evil Ways the stand out cut from their debut, while their September 1970 released sophomore album, 'Abraxas', is represented here the band's majestic version of Peter Green's irresistible Black Magic Woman and the equally compelling instrumental, Incident At Neshabur. 'Santana III' from 1971 contributes Jungle Strut, Batuka and No One To Depend On; the latter also became a Top 40 hit single in 1972. Subsequent to that record the group underwent substantial changes to its line-up. Bassist David Brown was replaced by Doug Rauch and Tom Rutley. Percussionist Michael Carabello was superceded by Armando Peraza and keyboardist/vocalist Gregg Rolie also left (to form Journey) and was replaced by Tom Coster. Moving into the mid 1970's, Dance Sister Dance and Europa are drawn from the 'Amigo' album, whilst Transcendence and a version of the Rod Argent-written 1964 classic hit for British rock band The Zombies, She's Not There, come from 1977's 'Moonflower'. The band's personnel continued to evolve, and in 2014 many of the original members returned to the fold as Carlos Santana sought to reunite the survivors of the classic 1969 Woodstock line-up. This dazzling live set is a fitting testament to what has made Santana so very special across these years.