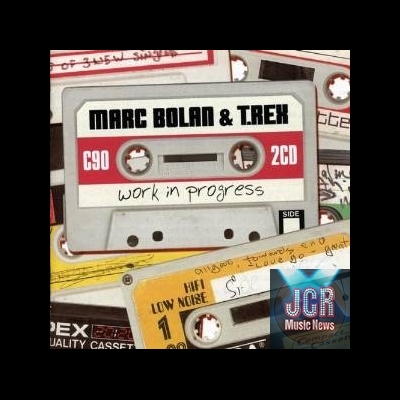 Marc Bolan recorded a lot -- so much, it seems, that he documented every time he picked up a guitar, whether it was at home or in the studio. Over the years, much of this has come out, most notably in the T. Rex Unchained series, which spans a mind-boggling 16 volumes (and this doesn't even include the rarities and outtakes that appeared on expanded versions of the proper albums). Unchained is a hardcore fan's delight, but it is nearly impossible to navigate for anybody who doesn't have prior knowledge of Bolan minutia, or who doesn't have the time and patience to sort it all out. That's where this double-disc, Work in Progress, comes in -- it distills the series to 55 highlights, offering a disc of recordings Bolan made at home, and a disc that he recorded in the studio with T. Rex. This is still quite lengthy, but the difference is that it's sharply chosen and sequenced, so it's as enjoyable as a regular T. Rex collection, albeit one with varying quality of fidelity and performances. There are no lost classics on either disc, and sometimes the tracks don't amount to more than a sketch of an idea, but it's all charming and tuneful; Bolan would throw away hooks other bands would kill to have, and it all sounds effortless, which, given the number of Bolan's unreleased recordings, it probably was. For those who want to dig a little deeper than the albums but don't have the bottle to slog through all the Unchained discs -- or for those who want a collection of highlights from that archival series -- Work in Progress delivers in spades