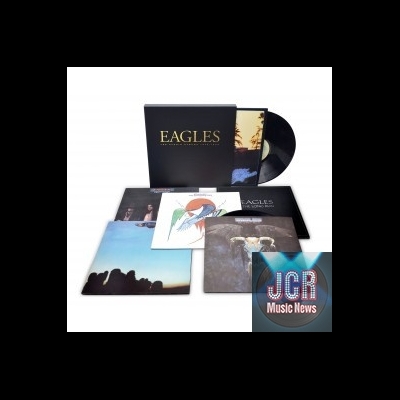 THE STUDIO ALBUMS 1972-1979 includes each of the six Eagles albums that defined an era. Each LP features replicas of the original album packaging with two special artwork upgrades - the sleeve of the debut album, Eagles, will finally be released as the band originally intended, with no glue flaps, so the cover folds out into a poster, as described in this year’s acclaimed documentary History of the Eagles. Hotel California will include a replica of the poster from the original issue with band photos by Norman Seeff in full color, for the first time. The albums come housed in a slipcase with a gold foil stamp of the band’s logo.

The Eagles are a band that needs no introduction. With lineups that included Glenn Frey, Don Henley, Joe Walsh, Don Felder, Timothy B. Schmit, Bernie Leadon, Randy Meisner, and Don Felder, the Eagles are one of the most successful bands in history, having sold more than 120 million albums worldwide, earning five No. 1 U.S. singles and six GRAMMY® Awards. The band’s Eagles – Their Greatest Hits 1971-1975 album is the best-selling record of all time, with more than 29 million copies sold.

You are an unconditional fan of EAGLES ? Check if you have all the collection.
If you just want discover a little more, the list below will help you.