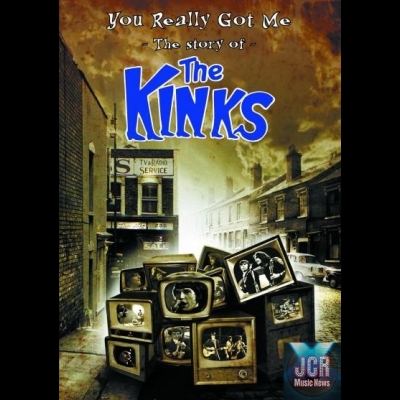 Of all the British bands that broke through commercially in America who were part of the 'British Invasion' of the sixties, one band stood head and shoulders above all the others as being quintessentially English. That band was the Kinks.

Led by Ray Davies and his younger brother Dave Davies, the Kinks burst onto the music scene in 1964 with their ground breaking hit single You Really Got Me. This was the band's third single and it reached number one in the UK singles chart and made the American top ten. The band had started out some two years previously under the name The Pete Quaife band. Various other names came and went until the band settled on The Ravens. This name itself was soon replaced by The Kinks when the group signed a record deal. Along with the Davies brothers the band was made up of bassist Pete Quaife and drummer Mick Avory. Originally, like many other aspiring band of the early sixties they were an aspiring rhythm and blues band and their first two singles bear out this claim, although the second single You Still Want Me was the first Kinks single to be written by Ray Davies.

Once the band broke through with You really Got Me they were off and running and further hit singles followed with All Day And All Of The Night, Tired Of Waiting For You, Set Me Free and A Well Respected Man (all of which were written by Ray Davies, as was the vast majority of the Kinks material) all doing well within the next twelve months. In fact the Kinks were considered one of the biggest bands of the period and Ray Davies, one of the eras more important and highly regarded song writers. Following a disastrous US tour in 1965however the Kinks were banned from working in America for four years until the ban was finally lifted in 1969. This was an important period for the Kinks losing them access to one of the world's biggest markets particularly as some of their best work was recorded and released during this time including the singles Sunny Afternoon, Waterloo Sunset and Days and the albums Face To Face, Something Else and the critically lauded The Kinks Are The Village Green Preservation Society. Shortly after the recording of this landmark album in 1968, founder member Pete Quaife left the band and was replaced by John Dalton.

Into the seventies the band continued to enjoy hit singles despite a small drop in popularity at the end of the sixties singles wise. In the early seventies they made the charts once more with Lola, which saw the debut of keyboard player John Gosling. Lola was followed by another big hit single Apeman and in 1972 the last hit single for almost ten years with Supersonic Rocket Ship. During the seventies the band had switched labels and received one of the biggest advances at the time for a million dollars.

It was during the early to mid seventies that the Kinks also began what was termed their theatrical period with themed albums and live shows to accompany them and between 1973 and 1976 the band released the albums Preservation Acts 1 and 2, Soap Opera and Schoolboys In Disgrace. These albums stretched the Kinks musically and were generally well received but following the release of Schoolboys In Disgrace the band once again signed a new deal with Arista records and adopted a more rock direction with the first album for Arista, Sleepwalker.

Subsequent albums such as Misfits and Low Budget also did well in America where the band was now gearing up to be a big stadium attraction on the touring circuit. Following the release of Sleepwalker long time bassist John Dalton left to be replaced initially for a short period by Andy Pyle and then subsequently by Jim Rodford and shortly after, John Gosling left to be briefly replaced by former Pretty Things keyboard player Gordon Edwards. He was in short order replaced by Ian Gibbons who stayed with the band for the remainder of the band's career save for a short period between 1989 and 1993.

Elsewhere the band was now receiving plaudits from many of the 'New Wave' bands both in the UK and in America. Further albums followed during the eighties and nineties including the hugely successful One For The Road live album, which was also released as one of the first music concert videos. Through the eighties the band continued to record and tour to large audiences although by 1984 drummer Mick Avory was sacked due to internal conflict. He was replaced by Bob Henrit who had previously played with bassist Jim Rodford in British band Argent during the seventies.

The band continued until mid 1996 and since that time has been inactive as a band with both Ray and Dave Davies releasing solo material. In 2004 Dave Davies suffered a stroke but since that time has made a slow but steady recovery. Ray Davies has also said he is keen to reunite the Kinks and rumours persist that this may happen in 2010.

This DVD contains some of the Kinks finest moments and is full of rarely seen performances from the sixties right through to the nineties and also contains comments from the various members of the band including Ray Davies, Dave Davies and Mick Avory. Some of the performances featured here include You really Got Me, ‘Til The End Of The Day, Waterloo Sunset, Days, Celluloid Heroes and many more including the Dave Davies hit single Death Of A Clown. Footage comes from live concerts and television performances in America, the UK, Germany and Japan and will merely reinforce what many people already know. The Kinks were one of the most important and most loved bands of the last forty plus years.