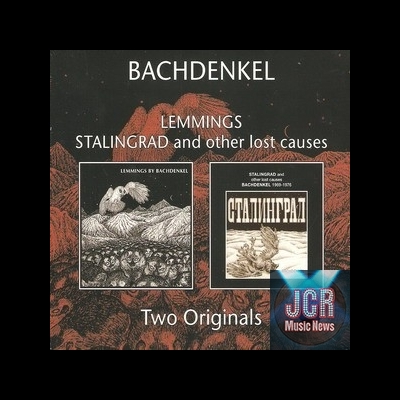 Lemmings & Stalingrad and other lost causes

BACHDENKEL was an English rock band that started under the name “YOU KNOW WHO” in 1968. The three piece consisted of bandleader Colin Swinburne on vocals/guitars/keyboards, Peter kimberley on bass/piano/vocals and Brian Smith on drums, with Karel Beer as additional musician, lightening engineer and producer. The band moved to France to live, perform and record.

In the 10 years of excistence BACHDENKEL only recorded 2 albums, the first album “Lemmings” was recorded in 1970, but wasn’t released until 1973, the second album called “Stalingrad” (in cyrillic letters) was recorded and released in 1977. in the mean time BACHDENKEL toured small venues through europe (mostly France).

BACHDENKEL started as a Flower Power psychedelic rock band (Pink Floyd, Soft Machine, Beatles, Procol Harum), but developed towards a more symphonic/melodic progstyle for their second album. Their sound is dominated by guitar and drums, with great vocals and occasional keyboard passages.

You are an unconditional fan of BACHDENKEL ? Check if you have all the collection.
If you just want discover a little more, the list below will help you.