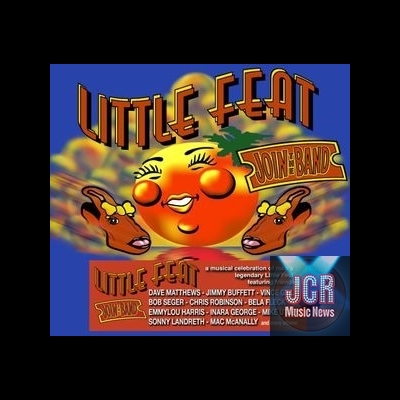 Not too long after their successful 1988 comeback, Let It Roll, Little Feat quietly morphed into a working band, one that made its name via its gigs, not its records. New albums popped up -- some better than others, none all that bad -- but their strength was the stage, where they relied on that incomparable catalog of chestnuts, occasionally dropping a newer tune into rotation. They've been jamming on these songs so long that it's no big deal that they've invited a group of friends -- some old, some new, some inexplicable -- to play those songs, along with some other great jammable tunes, like Bobby Charles' immortal 'See You Later Alligator' and the Band's deathless 'The Weight,' which does lend itself self to communal singalongs from the Staple Singers to Weezer. If the title itself isn't a tip-off, communal singalongs are the name of the game here, as everybody kicks back and cheerfully warbles through a good selection of songs, never quite reworking them -- well, apart from a sorely misguided attempt to skew 'Fat Man in the Bathtub' toward Dave Matthews' loping worldbeat style -- but rather playing them one more time, sometimes with feeling. More often, they play with a sleepy comfort, slipping these songs on like flip-flops that may be kicking around two summers too long. Depending on who's along for the ride, this vacillates between overly familiar and happily friendly, with some longtime friends inspiring a lazy stroll (Jimmy Buffett, who lent his studio for this project, dozes through his pair) while others nudge the band into second gear (Vince Gill kicks up some dust on 'Dixie Chicken' and 'Spanish Moon'). Join the Band is bottom-loaded something fierce, as it concludes with Emmylou Harris leading Feat, Béla Fleck, and Sam Bush through a down 'n' dirty 'Sailin' Shoes' that harks back to Lowell George at his most cheerfully vulgar, while his daughter Inara turns in a delicate, lovely 'Trouble' that's gently moving. And then there's Chris Robinson, who joins the group for Bill Payne's 'Oh Atlanta,' pushing the band toward the only cut that could be called 'lively' here. It's a great reminder of how good a rock & roll band Little Feat were and can still be, but listening to the rangy good times on this one cut, it's hard not to wish that Robinson had just coaxed his brother into delivering a full-fledged Feat tribute with the Black Crowes instead.