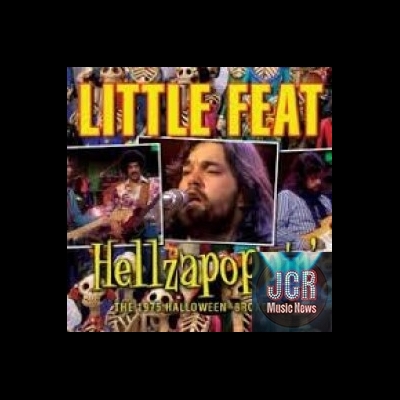 • In retrospect, it’s not surprising that Little Feat are on such blistering form during this 1975 WCBN broadcast,
transmitted from the prestigious Orpheum Theatre in Boston on that year’s Halloween Night. Already
renowned as a magnificent live act, the band had been honing their already-considerable skills to razorsharp
perfection during a consecutive 5-night residency at Paul’s Mall - a smaller club in the city -
immediately prior to moving to the larger, 2,500-seat Orpheum for this concert. The North American tour of
which these shows were part, was in support of Little Feat’s fifth LP, ‘The Last Record Album’, released just
days after this gig. Live versions of four tracks - Day Or Night, All That You Dream, Romance Dance and
Long Distance Love - are featured here.
• By this time, Little Feat had been together for six years. Guitarist, singer and songwriter Lowell George had
been fired from Frank Zappa’s Mothers of Invention in 1969 for - allegedly - writing a song about drugs
(Willin’). Zappa was vehemently anti-drugs. Lowell teamed up with keyboardist Bill Payne (who had
auditioned for the Mothers too) and the duo recruited bassist Roy Estrada (another ex-Mother) and drummer
Richie Hayward (from George’s previous band, The Factory), to form Little Feat.
• The Mothers’ connection turned out to be beneficial however when Zappa, differences notwithstanding,
recommended Little Feat to Warner Brothers, who signed them. The band also often used cover artist Neon
Park, who had painted Zappa’s ‘Weasels Ripped My Flesh’.
• Lowell George was injured during the recording of Little Feat’s eponymous debut album in 1971 and slide
guitarist Ry Cooder was drafted in to deputise on Willin’. The song has since become a standard with
Country rock artists having been covered by The Byrds, The Flying Burrito Brothers, Linda Ronstadt, Steve
Earle and Commander Cody amongst others. Little Feat’s first two albums were firmly rooted in the Blues,
with the first featuring a medley of Howlin’ Wolf numbers, Forty-Four Blues and How Many More Years.
Released a year later, Sailin’ Shoes, was another highly acclaimed release. Live versions of A Apolitical
Blues, Cold Cold Cold, Tripe Face Boogie, Willin’ (the song had been re-recorded with Lowell on slide guitar)
and Teenage Nervous Breakdown are all included in this broadcast set.