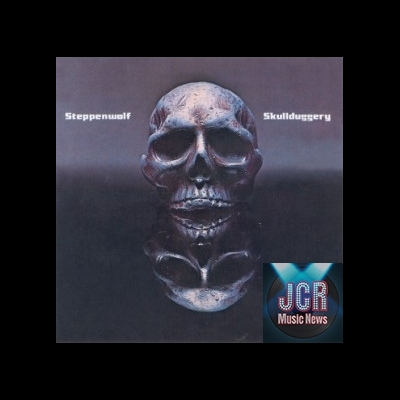 What those 60s hippie-metal Steppenwolf were doing in 1976? Good question, first: not hippie-metal, that was so passé: the fashionable now were the silvery cork heels, the jewfros and the discotheques to dance ABBA and the ELO wearing perhaps some flashy-orange suit (in rancid Spanish this sort of absurd outfit is adjectived as “gaitero”, eg: “how gaiteros are your red-fluo pants, Chad” or “look at that old woman and her very gaitera orange mokini”): well, in those times, the Steppenwolf were going ahead, with their alma mater and owner John Kay, but of course, with an updated noise, more sophisticated, less “meat n potatoes”: let’s accept it, the trend in 1976 was to be fraudulent, nobody wanted to sound like a greasy and stinky Canned Heat 1969 living in community, now the rock stars used perfume; even an intractable homo erectus like Tony Iommi cut his hair for the Sabotage sleeve.
About this Skullduggery album little can be said, not even the disco flirtation of “Sleep” or the cowbell of “Life is a gamble” can bump this up, being a rather sub par disc.
For the very end we stumble with the ultra-funka “Lip service”, that sounds like something that Jackie Onassis danced at Studio 54 or something.
John Kay folded Steppenwolf carefully, and put it into the wardrobe for 6 long years after this baffling Skullduggery but, hey: he wouldn’t give up so easily, would he?