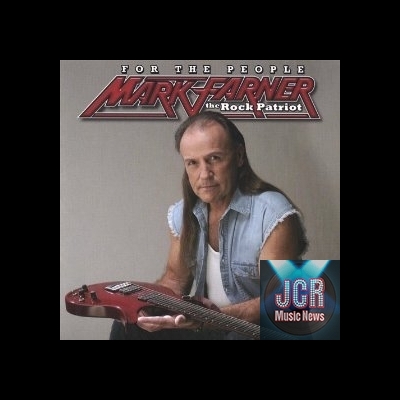 Long revered and acknowledged as a primary force in popularizing the American power trio, Mark Farner reemerges with both guns blazing and perhaps his most defining album of his solo career, For The People.

Rock icon Mark Farner’s latest album portrays a return to his roots--the roots of American rock. Laden with powerhouse tracks, For The People harkens back to the artist’s definitive style that has been embraced by tens-of-millions of fans worldwide. The inimitable knack for a well written song, perfectly placed power-chord, hooky melody line, blistering guitar solo and, of course, an ever-soulful vocal makes this album perhaps Farner’s high-water mark as a solo artist. “For The People” leads off the album with a political message that doses the listener with a driving guitar that seamlessly weaves itself into the lyric creating a perfectly meshed pop track. “Nadean” follows suit and has been likened to Farner’s “Bad Time To Be In Love,” often cited as a pure pop classic. “You’re My Girl” again, slams into the realm of powerhouse rock with Farner’s take-charge rock attitude in full bloom. “Where Do We Go From Here” poses powerful political questions and reminds fans that Mark Farner has many layers to this persona that go way beyond Mark Farner, Rock Star. Long-time fans will readily recognize his message and new listeners will perhaps be enlightened by his inspired point of view. No matter how you approach this record, For The People has something to say and the artist takes that message on the road live this summer in support of this defining work.

Mark Farner has a rich history that sometimes overshadows his solo work. This is a syndrome that is common to so many great artists that were vital members of iconic bands, i. e., John Fogerty of Creedence Clearwater Revival. Ironically both artists emerged simultaneously onto the late-sixties rock scene to great acclaim and Farner and his band mates in Grand Funk Railroad proceeded to blow the roof off the rock world in 1971 by selling out New York’s Shea Stadium faster than The Beatles! With monster hits including: “I’m Your Captain (Closer To Home),” “The Locomotion,” “We’re An American Band,” “Bad Time” and “Mean Mistreater,” Grand Funk Railroad went on set attendance records and record sales throughout the world. Mark Farner remains in touch with that legion of fans and has truly made and album, For The People .

You are an unconditional fan of MARK FARNER (Grand Funk Railroad) ? Check if you have all the collection.
If you just want discover a little more, the list below will help you.