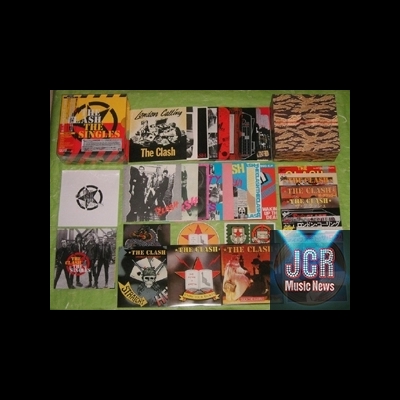 Producing box sets of CD replicas of original 7' singles is a bit tricky: as 2006 sets by Elvis Presley and Michael Jackson prove, it's all too easy to sacrifice either completeness or historical accuracy for the sake of a set that's easy to package and sell. Elvis and Jacko both are cursed with extraordinarily large catalogs, however; even when they're limited by number one singles, as they are on Elvis' set, or by singles that were accompanied by videos, as they are on Jackson's Visionary, there are still notable omissions, and that's not even taking into account that Jackson's set was missing original B-sides. Why all this talk about Elvis Presley and Michael Jackson in a Clash review? Because box sets containing nothing but CD replicas of original singles are such a curious, collector-driven breed that only mega superstar acts like Elvis and Jackson have them in their discographies, and there needs to be some kind of yardstick to measure the Clash's CD singles set by. Because this set -- appropriately and simply called The Singles -- succeeds where most other sets of this nature fail: it is historically accurate and complete, containing replicas of all the Clash's singles, including B-sides from both 7' and 12' singles, all added to the appropriate singles. It not only has all the commercially released singles, but also the legendary Capitol Radio EP, which was given away with the NME in 1977. It is lavishly and intelligently produced, from its re-creations of the original artwork (including labels) to its booklet, containing testimonials from famous Clash fans including Mike D, Shane MacGowan, John Squire, Nick Hornby, Carl Barat, Tim Burgess, Steve Jones, Damon Albarn, Ian Brown, Danny Boyle, Bobby Gillespie, Bernard Sumner, and Pete Townshend. This all makes for an enticing package, ideal for nostalgists who either lived through the Clash's reign as the only band that mattered or those who wish they did, but this also serves a purpose for collectors since it contains a handful of songs that never appeared on CD before, including the This Is Radio Clash and This Is England EPs and several mixes of 'The Magnificent Seven.' These rarities are, of course, primarily of interest to Clash collectors, but that's who this set is for and that's who this set will satisfy. Not every Clash fan will need this -- after all, as fun as it is to listen to all the original singles in a row, it's a bit of a chore to work through a 19-disc set of CDs that range from two tracks to seven tracks -- but those who want to take this nostalgia trip will find The Singles hard to resist.

You are an unconditional fan of CLASH ? Check if you have all the collection.
If you just want discover a little more, the list below will help you.