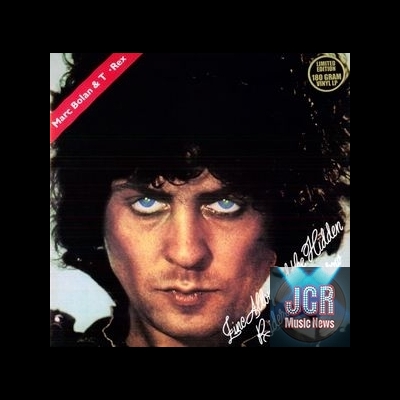 By late 1973, Marc Bolan's star was waning fast. No longer gunning out those effortless classics that established him as the most important figure of the decade so far, he embarked instead on a voyage of musical discovery, which cast him so far adrift from the commercial pop mainstream that when his critics said he'd blown it, he didn't even bother answering them back. Or that's the way it appeared at the time, and today, too, it must be acknowledged that 1974's Zinc Alloy & the Hidden Riders of Tomorrow is not classic Bolan, even if one overlooks the transparency of its title. After all, hadn't Bowie already done the Fictional Someone & the Somethings From Somewhere routine? Indeed he had, as his fans kept remarking at the time, and when the knives began slashing Zinc Alloy to shreds, that was one of the fiercest wounds. Time, however, has healed almost all of them. Indeed, hindsight proves that, far from losing his muse, Bolan's biggest sin was losing his once-impeccable sense of occasion. The world wasn't ready for this latest T. Rex, and the fact that it wasn't interested in the old T. Rex either is just another object lesson in the fabled fickleness of pop fans. How faulty was Bolan's timing, though? As it transpired, he was out by no more than a year, maybe less than six months. The era of disco was coming, and with it the wholesale transformation of a wealth of rocking talents. But while David Bowie was barely dreaming of young Americans' fame, and Bryan Ferry was still road testing the pharmaceutical properties of l'amour, Bolan was up to his neck in American radio, pulling out an album that exceeded his assumed capabilities no less than it shot right over the heads of the kids who once bought all his hits. 'The Groover,' the spring 1973 single which many regarded as the first sign of Bolan's fall from grace, marked the birth of this new fascination, a simple but solid slab of funk-inflected rock which did, indeed, groove. (The track is one of five bonus tracks appended to the album's Edsel reissue.) The yearning, heavily orchestrated hit 'Teenage Dream' hit notwithstanding, the heart of Zinc Alloy, then, simply followed in 'The Groover''s footsteps, an abandoned romp through the R&B influences which Bolan had always acknowledged, but never truly explored -- the solid James Brown drive of 'The Avengers (Superbad),' 'Interstellar Soul,' 'Liquid Gang,' and the implausibly slight, but impressively groove-ridden 'You've Got to Jive to Stay Alive.' Into the same bag, one can also throw the period B-sides 'Satisfaction Pony' and 'Sitting Here' -- both of which have also been added to the album. Deeply soul-soaked songs like these aren't simply a new direction. They are the very signposts which would soon be guiding so many other English rock talents down some very unfamiliar alleyways. Zinc Alloy was released in March, 1974. Bowie began rehearsing his Philly Dogs tour in July. Yet, even with such credentials to uphold it, this isn't quite Bolan's soul album. Those demons would be exorcised on a second record cut with singer Sister Pat Hall and elsewhere in his collaborations with girlfriend Gloria Jones. Besides, the production here was just a little too cautious to truly convince the wary listener. Neither can it be neatly categorized in the same fashion as, say, Bowie's Young Americans -- Bolan looked across the spectrum for his influences, but he never once went to Philadelphia. Rather, it straddles that same pop/rock, funky R&B landscape as early Funkadelic, Sly Stone and Co., neither fish nor fowl, dead fish nor foul, but something somewhere in between. Approach it with caution. But get in there regardless. [The 2002 deluxe two-CD edition adds five songs to the original disc ('The Groover,' 'Midnight,' 'Truck On (Tyke),' 'Sitting Here,' and 'Satisfaction Pony') and adds a second disc that has a track-by-track re-creation of the first disc made up of alternate takes, as well as six more bonus tracks appended to those tracks.]