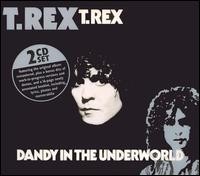 Marc Bolan welcomed the advent of punk rock with the biggest smile he'd worn in years. The hippest young gunslingers could go on all night about the influence of the Velvet Underground, the Stooges, and the Ramones, but Bolan knew -- and subsequent developments proved -- that every single one of them had been nurtured in his arms, growing up with the ineffable stream of brilliant singles he slammed out between 1970-1972, and rehearsing their own stardom to the soundtrack he supplied. With tennis racquet guitars and hairbrushes for mics, they stood before the mirror and practised the Bolan Boogie. Of course, most punks only knew three chords. That was all Bolan ever taught them. Dandy In The Underworld, released early in 1977, confirmed Bolan's punkish preeminence. Still retaining its predecessors' demented soul revue edge (most successfully via the yearning 'Soul Of My Suit'), but packed solid with powerful pop (the previous summer's hit 'I Love to Boogie' included), Bolan's personal predictions for the punk scene literally exploded out of the grooves. The title track and the churning 'Visions Of Domino' all bristle with revitalized energy, while 'Jason B. Sad' cheekily medleys Bolan's own 'Bang a Gong' and 'Telegram Sam' melodies into a dead-end drama utterly in keeping with the new wave's own belief that the future was futile. By the time the album wraps up with the rock'n'armageddon-flavored 'Teen Riot Structure,' Bolan was not simply wearing the mantel of punk-godfatherhood, he was happily sticking safety-pins through it and preparing his next move, the driving 'Celebrate Summer' single -- absent from the original album, but included here as one of five bonus tracks appended to the Edsel remaster. Riding in on buzzsaw guitar and thundering bass, it packed a killer chorus and an uplifting message ('hey little punk, forget that junk and celebrate summer with me') and it really was the greatest record he'd made in years. It was also his last -- a month after its release, Marc Bolan was dead. Sorrow immediately imbibed Dandy In The Underworld with a dignity which, had Bolan lived, it probably wouldn't have otherwise deserved. It is not, overall, one of his strongest albums, and the demos and outtakes included on the later volumes of the Unchained series suggest that his proposed next album would have left it far behind. But conjecture, like hindsight, can be a dangerous gauge. At the time, Dandy not only seemed bloated with promise, it was pregnant with foreboding as well. Listen again to the lyrics of the title track -- self-mythologizing autobiography and not a happy ending in sight. Just like real life. [Also available as an expanded edition.]