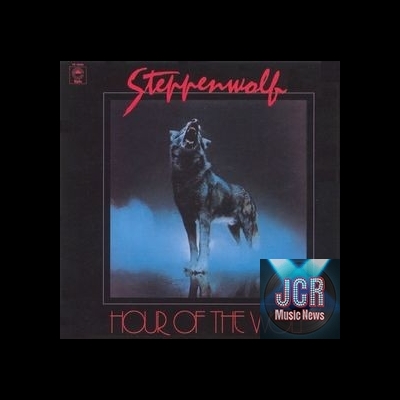 Hour of the Wolf

In the mid 70s the old psych Steppenwolf was dead, and maybe fortunately, because that phase of the band was pretty uneven, not to say faulty.
In 1975 this noble band release another truly fun album, called Hour of the wolf, which is more hard rock, spiced with some brass, and with some female backing vocals, though everything in its right point.
In 1975, the music that Steppenwolf –or the band of John Kay- was making, was a hard rock, with a truly American savour, spiced with some southern rock reminiscences, and all this strained through the privative and urban heaviness of the creators of “Born to be wild”.
Possibly if one band can boast about the primeval use of the heavy metal term, that band got to be Steppenwolf, if not in convinced idiosyncrasy, at least in cosmetic appearance, and about Hour of the wolf some specks of that old mystic are thrown on the grooves of the vinyl, with tracks that, one way or another are compelling enough: the great opener “Caroline (are you ready for the outlaw world)” is one of those simple rocks to sing along, and yet having a certain sophistication, with its upbeat mood and its brass section. Same can be said on “Annie, Annie over”, an inspired John Kay and a catchy rock song with sparkles of disco-music.
“Hard rock road” shows the hard rock n roll variant of the 70s with some cowbell: it should be created a new genre called 70s hard rock with cowbell that would pack tight several bands, like parsley in plantpot, namely your Blue Öyster Cult, Bad Company or Grand Funk’s a la carte. Just sayin’.
Two highlighs more here are “Someone told a lie” (this one just because of its lol talk box), and the last song “Mr. Penny Pincher”, the best tune of the album imo, with a very good atmosphere, created by means of synthesisers, and a fine melody, still keeping its hard edge: I would call it a futuristic 70s heavy metal, but that’s just me.
Nonetheless still short to be a great album Hour of the wolf is quite an entertaining LP.