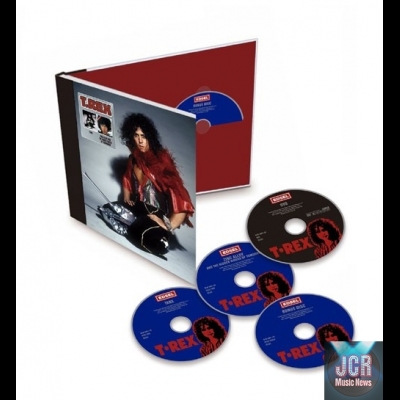 This 80 page 12x12 hardback book includes: 4 x CDs and 1 x DVD “Tanx” and “Zinc Alloy” and the contemporary singles remastered by producer Tony Visconti, Demos and outtakes, Brand new liner notes by Tony Visconti and acknowledged expert Mark Paytress, Plus photographs of ‘Tanx’ and ‘Zinc Alloy’ period 7” singles from around the world, previously unpublished photos, sheet music and press cuttings. Preceded by some of Bolan’s most fondly-remembered singles, “Children Of The Revolution”, “Solid Gold Easy Action” and the classic “20th Century Boy”, 1973’s Tanx was the first T. Rex album to make full use of the ever-expanding range of studio gadgets. And while the album represented a new musical departure, several tracks maintained a direct link to the old sound. Hit singles “The Groover” and “Truck On (Tyke)” preceded Zinc Alloy, which was released in March 1974, and included the follow-up hit “Teenage Dream”. The results of listening to black radio stations whilst touring the US during 1973 are apparent on this album, something of an oft-overlooked treasure trove.