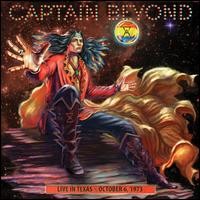 A never before released full length concert album from one of the greatest undiscovered gems of 70s rock, Captain Beyond!

Formed in 1971 by members of Deep Purple, Iron Butterfly & Johnny Winter s band, Captain Beyond is heavy, spacey and most definitely FAR OUT!

This show was recorded just after the release of the band s second album, Sufficiently Breathless, during the their tour with King Crimson!

You are an unconditional fan of CAPTAIN BEYOND ? Check if you have all the collection.
If you just want discover a little more, the list below will help you.