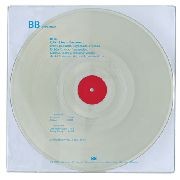 LP pressed on 140-gram CLEAR vinyl, presented in PVC sleeve (limited to 500 copies). Features high quality live FM radio broadcast recordings from Hannover, 11 April 1976 and interestingly featuring the pied piper of the early seventies British hippy scene Magic Michael (Michael Cousins) on vocals. Michael, like Rodney Bingenheimer, was more famous for who he knew than for what he actually did, although he did appear on the 'Greasy Truckers Party' LP in 1972, the 'A Bunch of Stiff Records' compilation in 1977, and also collaborated with members of the Damned. Michael had actually also auditioned to be Can's vocalist after Damo left the band, but was rejected, so it is interesting to hear what a post-Damo Can might have sounded like with Magic Michael at the helm.