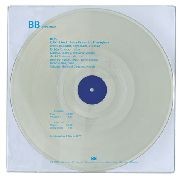 LP on 140-gram CLEAR vinyl in PVC sleeve (limited to 500 copies). Extremely rare recording of Can performing live at Aston University in Birmingham, on March 4, 1977 and featuring the new addition of Rebop Kwaku Baah (the Ghanian percussionist well-known for his work with Traffic, Steve Winwood, Eric Clapton, etc.) and Roscoe Gee (a Jamaican bassist who had also recorded with Traffic). Holger Czukay, freed from bass duties, now began experimenting with an array of electronic sounds, which he also began adding to the mix in part to counterbalance Can's new supercharged rhythm section. This period was actually the band's most commercially successful, with their disco-infused single 'I Want More' topping the UK charts in 1976.