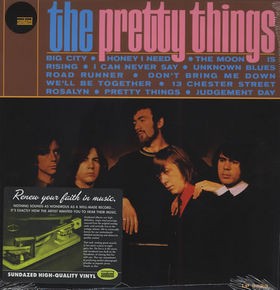 This is the 1st album by excellent British band The Pretty Things, which was one of the most interesting groups to emerge in the 1960s, but which failed to reach the recognition it truly deserved. Often compared to The Rolling Stones in their early days, the band would start a path towards proto-Prog with their 4th album entitled 'SF Sorrow' (1968), which was the first Rock opera, preceding The Who's 'Tommy' by several months. This amazing debut already shows the incredible musical powers possessed by these young musicians, perhaps too wild and too honest for their own good, which mix the raw intensity of black American music with the British pop movement, producing a new amalgam, which would rule the world of music for many years. Almost 50 years later this stuff still sounds amazing!

You are an unconditional fan of PRETTY THINGS ? Check if you have all the collection.
If you just want discover a little more, the list below will help you.