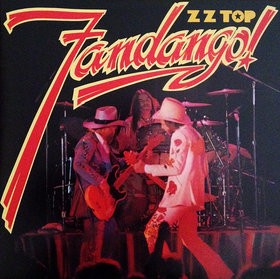 Fandango is a pretty cool album as a whole. The first half of the record captures this tight little trio live at the Warehouse all the way down in good ol' New Orleans from way back when in the day. The second half of the albums finds the boys in the studio pumping out six of the absolutely finest selection of songs the band recorded during their heyday in the 1970's.

The first half, the live half is less than stellar. The performances are erratic and far from what its actually like to see these good ol' boys from Texas live.

It truly is the second half of studio tracks that makes this album worth checking out. 'Nasty Dogs and Funky Kings' opens the studio part and does so very well. This hard pumping rocker holds up well against the strongest of ZZ Top tracks. 'Blue Jean Blues' follows next as a slow crawling blues number. Not only does this feature some of the great Billy Gibbons' best ever guitar playing and vocals, but it really is one of the coolest songs ever written in my book. Then oh boy here we go with 'Balinese' one of the best forgotten tracks in ZZ Tops cannon of killer boogie woogie rock N' roll. What a tight little jam that one is! 'Mexican Blackbird' might be a little novelty but what a great nic-nak this little ditty is. Billy's slide work on that song is so subtle but is easily among some of the best he has ever laid down on record. 'Heard It On The X' is one of the more radio friendly songs the Top released during the 1970's but I'm. Firm believer that it is really one of the bands strongest and greatest statements as a little boogie woogie rock n' roll band! The album closes with the classic 'Tush' a song that will go down in history as one of rock n' rolls all around best tracks as well as one of their most well known. What a damn fine ending.

Dusty Hill, Frank Beard, and the reverend Billy 6. Gibbons are rock n' roll at it's most raw and at its true grittinest best! What a tight little three piece these guys are!

You are an unconditional fan of ZZ TOP ? Check if you have all the collection.
If you just want discover a little more, the list below will help you.