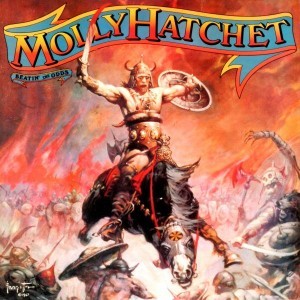 When Molly Hatchet lost Danny Joe Brown, I'm sure the band felt an empty void. Or maybe not, considering this album dropped a year later with new singer Jimmie Farrar. Now, Farrar doesn't have the gravelly vocals of Brown, but I think his range is a bit more impressive and he brings even more of a rock nature to these songs. Still plenty of Southern swagger tucked in there, but in my honest opinion this album levels the first two MH albums hands down. Every song here is simply good.

The title track kicks us off a good ol' rockin' start, followed up by the less impressive but still good 'Double Talker.' Then comes the amazing 'The Rambler,' which is quite possibly one of the better songs under the Hatchet umbrella. 'Sailor' is a bit average, while the next two are quite good. The final three songs are all solid, but nothing else here really touches what 'The Rambler' set forth. Farrar does a great job there, definitely an underrated Southern rock tune.

In all, I find this album better than the first two with Danny Joe Brown. Contrary to what the mainstream says, these guys were not like Skynyrd, and in some ways I dare say these boys were better. They, alongside Blackfoot, brought a heavier more 'rock-ish' nature to Southern rock, and pretty much did away with the country elements. I love this particular album, there isn't a thing wrong with it, and that cover art is exceptionally awesome. I gotta find that one as a t-shirt somewhere...