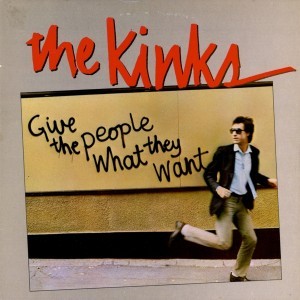 The Kinks are an amazing band for so many reasons. From the vintage garage rock of the 60's, to the concept album (Village Green, Arthur, etc), to the theatrical period, and now to the hard rock of 'Give the People What They Want', the Kinks sound evolved so many times. This album shows you that they can really rock the house!

I think the reason a lot of people don't think highly of this album is because it's drastically different from the more critically acclaimed and better known records such as Village Green, Arthur or Muswell Hillbillies and those are what most of the fans are used too.

But still, good music is good music. And with the god awful hair/glam metal and new wave starting to become popular, this record is still better than most of the other music of 1981. Yes it has a strong 80's sound to it, but what didn't at that time?  Ray Davies strong songwriting and humor is still present, Mick Avory's drumming kicks ass on the album, and Dave Davies showcases some sick riffs on Around the Dial and Destroyer.

Hell, the Beatles and Stones probably would've sounded even more silly doing an album like this. Considering this is a 60's British Invasion band right here, this album is actually pretty decent.

Weak spots: Add It Up, Back To Front. But even those tracks aren't all too bad.