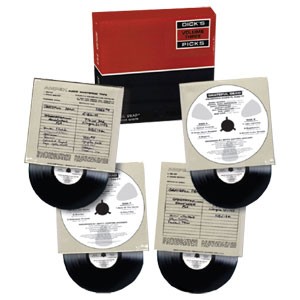 The Grateful Dead released an official live concert series called Dick's Picks. These shows have come to be known as some of the best Grateful Dead shows of all time. The Dick's Picks series, which started in 1993, was named for Grateful Dead tape vault archivist Dick Latvala, who selected his favorite shows with the band's approval and oversaw production of the albums. After Latvala's death in 1999, David Lemieux became the Dead's tape archivist and took over responsibility for the Dick's Picks releases. Today this series is being released on vinyl for the first time by Brookvale Records. Vol 3 has been remastered expressly for vinyl from the Original 1/4' Tapes by renowned Jeffrey Norman of Mockingbird Mastering. Mr. Norman has been in charge of all the crucial Grateful Dead releases. All albums are on 180 gram vinyl for the highest fidelity possible. LP sleeves will include original hand notes and images from the original recording tapes!

'The lineup that was resurrected post-sabbatical included co-founders Jerry Garcia (lead guitar/vocals), Phil Lesh (bass/vocals), Bob Weir (guitar/vocals), and Bill Kreutzmann (percussion). Plus, Mickey Hart (percussion) is back in the fold and staying for good. Also at the top of their game is the husband-and-wife team of Keith Godchaux (keyboards) and Donna Jean Godchaux (vocals). Although the entire concert is not presented, Dick Latvala -- Dick's Picks' namesake and the Grateful Dead's tape archivist -- made some choice selections throughout. Even as the set list may seem typical for 1977, each song is performed with the trademark greasy grooves and that almost sacred and unspoken ability for the players to unite and lift well-worn entries such as 'Sugaree' or the driving and admittedly disco-fied revival of Martha & the Vandellas' 'Dancin' in the Streets' that stretches a quarter-hour. Weir's coupling of 'Lazy Lightning' and 'Supplication' is energetic and adeptly executed. All the more powerful is the 'Help on the Way'/'Slipknot!'/'Franklin's Tower' trifecta. Garcia's excursions during the instrumental 'Slipknot!' are hands-down among the best moments...' - Lindsay Planer, allmusic.com