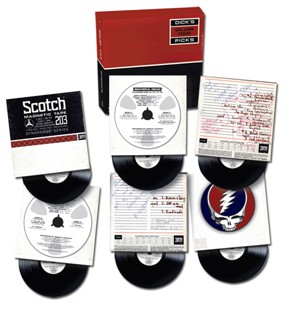 The Grateful Dead released an official live concert series called Dick's Picks. These shows have come to be known as some of the best Grateful Dead shows of all time. The Dick's Picks series, which started in 1993, was named for Grateful Dead tape vault archivist Dick Latvala, who selected his favorite shows with the band's approval and oversaw production of the albums. After Latvala's death in 1999, David Lemieux became the Dead's tape archivist and took over responsibility for the Dick's Picks releases. Today this series is being released on vinyl for the first time by Brookvale Records. Vol 4 has been remastered expressly for vinyl from the Original 1/4' Tapes by renowned Jeffrey Norman of Mockingbird Mastering. Mr. Norman has been in charge of all the crucial Grateful Dead releases. All albums are on 180 gram vinyl for the highest fidelity possible. LP sleeves include original hand notes and images from the original recording tapes!