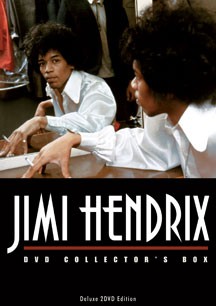 Contains the DVD, 'Jimi Hendrix - By Those Who Knew Him Best' and an additional new DVD title.

This two DVD set features a brace of documentary films about Hendrix that go behind the legendary persona in an attempt to understand how it was that a boy from the North West of America quickly became, and almost 40 years after his death absolutely remains, the finest, most imaginative and flamboyant guitarist ever to have manipulated a fret-board. Featuring interviews with his very nearest and dearest such as brother Leon , ex-girlfriend Melinda Merryweather, his producer Ed Chaplin, soul supremo and close colleague Geno Washington, plus many other acquaintances from throughout his life. With a backdrop of Hendrix music and some stunning live performances included, these films are as close as any have come to revealing the real Jimi Hendrix. While Jimi Hendrix didn't actually invent the electric guitar, he invented how to play it in a manner nobody had even come close to previously.