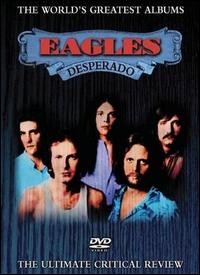 The Eagles' 1973 sophomore album, DESPERADO, found the band refining the country-flavored pop-rock that made their self-titled debut such a success World's Greatest Albums - The Eagles: Desperado film. This volume of THE WORLD'S GREATEST ALBUMS series weighs in on the lasting legacy of the landmark album through archival live-performance clips and interviews with rock luminaries such as radio DJ Bob Harris, journalist Barney Hoskyns, author Peter Doggett, and biographer Johnny Rogan World's Greatest Albums - The Eagles: Desperado review.

You are an unconditional fan of EAGLES ? Check if you have all the collection.
If you just want discover a little more, the list below will help you.