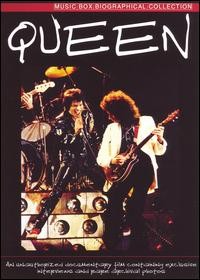 The Music Box Biographical Collection presents the full story of Queen, the glam stadium rockers. Queen's popularity endured throughout the 1980s and their stadium anthems, We Will Rock You and We Are the Champions, were played to packed audiences worldwide.

During the late 1980s, when they had to give up touring because of Mercury's illness, they reached new fans with fresh recordings such as The Miracle and Innuendo.
The band's revival was cut short by Freddie Mercury's death. Since then his memory and cult status has been kept alive with occasional concerts and releases of live concerts and other recordings.

With interviews from the people who know them best - and rare archive footage courtesy of private collectors from around the world - this documentary brings you an insight into why Queen became such an iconic band.

You are an unconditional fan of QUEEN ? Check if you have all the collection.
If you just want discover a little more, the list below will help you.