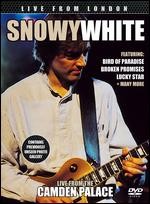 When you've played with legends such as Thin Lizzy and Pink Floyd, few people could question your place in music history. And when the person in question is Snowy White, performances like this Live From London concert lays any further debate to rest. Recorded in 1984 at the Camden Palace, acclaimed guitarist Snowy White sings and strums his way through all his greatest hits including Bird Of Paradise, Lucky Star and Broken Promises. Having played in numerous bands as a teenager on the Isle of Wight, Snowy in 1970 found himself in London, following in the footsteps of many hopeful young musicians looking for their first big break. Armed with his now trademark Gibson Les Paul Goldtop, Snowy worked as a session guitarist and also played in a group called Heavy Heart, before he came to the attention of Pink Floyd, thanks to a recommendation from Kate Bush's former manager Hilary Walker. Snowy played with the band on the 1977 Animals tour to great acclaim, especially for his solos during Shine On You Crazy Diamond Part VIII and Have A Cigar. When Scott Gorham of Thin Lizzy approached Snowy in 1979 to offer him a place in the band, Snowy was unwittingly embarking on a chaotic few years. His collaboration with the two bands lead to conflicting schedules and missed opportunities as he attempted to juggle his commitments, and resulted in him leaving Thin Lizzy in 1982. His affiliation with Pink Floyd continued though, working on projects with bassist Roger Waters and David Gilmour, who appeared on Snowy's 1994 album Highway To The Sun. Roger Waters again came calling, as he had done in the previous few years in 2006, and Snowy packed his guitar for The Dark Side Of The Moon Tour, taking in Europe, Australia, Asia and North and South America.

You are an unconditional fan of SNOWY WHITE ? Check if you have all the collection.
If you just want discover a little more, the list below will help you.