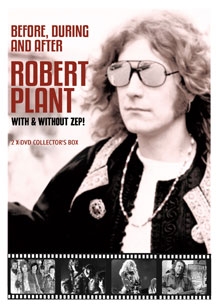 Through a musical career currently stretching across six separate decades, Robert Plant remains the most experimental and challenging artist to have emerged in the 1960s. And while Plant will always be remembered first as the astonishing vocalist from the mighty Led Zeppelin, this gargantuan collective were only operational for a mere 11 years. Indeed, Planty has been involved in so many varied projects, before, during and after, that a truly rounded documentary on this fascinating performer's life and work is thoroughly overdue. This 2 DVD set goes some way to fulfilling that need and includes one film covering the many different stages of Plant's career to date, as both a solo artist and a band member, while the second film concentrates exclusively on the man's most celebrated role during his most celebrated era. With both programs containing exclusive and archive interviews, rare and classic footage and some of the best music ever made, this double disc set is a package every fan of Percy Plant will want to own.