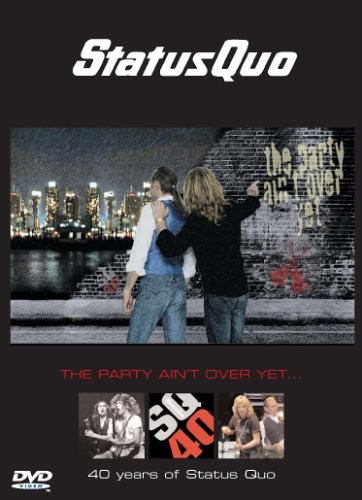 AIN'T OVER YET… 40 YEARS OF STATUS QUO' DOUBLE DVD : 7 NOVEMBER 2005
To celebrate the 40th anniversary of rock legends Status Quo, Warner Music Vision are set to release 'The Party Ain't Over Yet…' on 7 November 2005. This double disc DVD set follows the eagerly awaited release of the bands 27th studio album, also titled 'The Party Ain't Over Yet...', which was released on 19 September 2005.
'The Party Ain't Over Yet…' is a look at the musical career of one of Britain's best loved bands. Featuring an in depth documentary charting the history of Status Quo, archive footage from their incredible five decade spanning career, plus live performances and hilarious outtakes taken from the filming of the documentary.
Full contents details are listed below:
Documentary: 1hr 18mins
This newly filmed documentary gives the definitive history of Status Quo from their beginnings right up to the recording of their new album. This ultimate DVD features new extensive interview footage with all band members, giving the viewer an intimate look at each member of the band on a one on one level.
Archive Footage: 1hr 15mins
15 stunning performances spanning the bands extraordinary career, from previously unreleased promos to the very rarest concert footage:
1.Technicolour Dreams (promo 1968)
2.Down The Dustpipe (promo 1970)
3.Tune To The Music (promo 1971)
Live at Wembley Empire Pool 1974 including:
4. Big Fat Mama
5 & 6. Backwater/Just Take Me
7. Roll Over Lay Down
8. Don't Waste My Time
Live at Birmingham NEC 1982:
9. Forty Five Hundred Times
10. Someone Show Me Home (promo 1978)
11. Let Me Fly (promo 1978)
12. Burning Bridges (promo 1988)
Live Night of the Proms 1999:
13. Whatever You Want
14. In the Army Now
15. Rocking All Over The World
'Quo on the Street' - 30mins
Behind the scenes footage filmed during Quo's hilarious special guest appearance on Coronation Street. A marriage of two great British institutions the documentary has exclusive access to all areas of Status Quo's time on set including cast and crew interviews and outtakes.
Outtakes - 18mins
Hilarious bloopers and outtakes taken from the filming of the main feature documentary
The living legends that are Status Quo first signed to Pye Records, they released four albums including their first hit single 'Pictures of Matchstick Men' (1967). The band then signed to Vertigo in 1973 and released the album Piledriver which kick started their 40-year reign in the rock-pop charts, churning out hit after hit, including Caroline, Down Down, Whatever You Want and of course the boogie rock anthem Rockin All Over The World. Enjoying no less than 22 top ten UK chart hits from an astounding 27 studio albums, Status Quo have remained the quintessential British rock n roll band of all time.
'The Party Ain't Over Yet…' is the ideal addition to even the most ardent Quo fan's collection, giving the viewer an amazing behind the scenes look at the life and times of the greatest party rock n roll band in history.