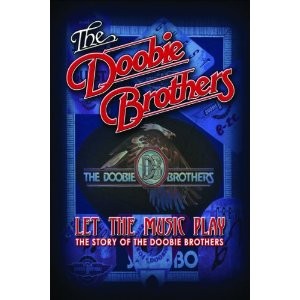 Let The Music Play: The Story Of The Doobie Brothers (DVD IMPORT ZONE 2)

Bonus live performances of: 1) Rainy Day Crossroad Blues 2) Without You 3) Listen To The Music 4) Black Water 5) Takin It To The Streets 6) Rockin Down The Highway 7) Neal's Fandango 8) Long Train Runnin 9) China Grove

Let The Music Play is the authorized story of The Doobie Brothers from their beginnings as a biker band in California in 1970, through their breakthrough with Listen To The Music in 1972, sustained success and line-up changes in the mid-seventies and their change of musical direction and further success following the arrival of Michael McDonald in 1976. Worn out by non-stop touring and internal disagreements the band broke up after a farewell concert in 1982. There were sporadic reunions in the eighties before the band reformed permanently in the early nineties and have continued touring and recording ever since. This new film features contributions from all the surviving key band members, their manager Bruce Cohn and long term producer Ted Templeman to tell the full story of the band's highs and lows through four decades of musical evolution.

You are an unconditional fan of DOOBIE BROTHERS ? Check if you have all the collection.
If you just want discover a little more, the list below will help you.