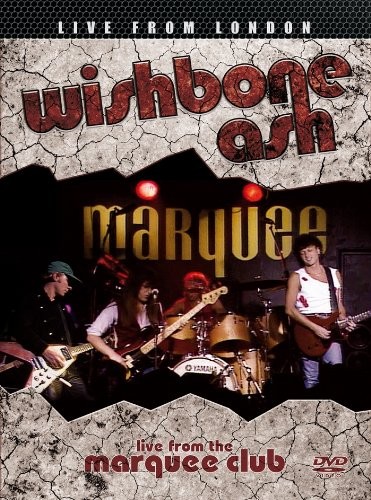 Pioneers of twin lead guitars, Wishbone Ash had huge success in the 70s as a wave of British rock groups dominated the airways and record charts. When London's Marquee Club celebrated its 25th anniversary in 1983, Wishbone Ash were invited to perform and the concert was captured as part of the Live From London series. Featuring hits from over a decade of albums, this DVD is a must for all fans and rock music lovers alike. With 23 studio albums to date spanning 4 decades, Wishbone Ash are one of the more enduring British rock bands of all time. Formed in 1969 Wishbone Ash are credited with being one of the first ever bands to use twin lead guitars. The original line-up consisted of bassist Martin Turner, drummer Steve Upton (who had previously played together in the band Tanglewood), lead guitarists Andy Powell and Ted Turner. The band's big break came in 1970 whilst opening for Deep Purple, when guitarist Ritchie Blackmore recommended the band to producer Derek Lawrence who helped them to secure their first record deal with Decca/MCA Records. In December of that year the eponymous debut album Wishbone Ash was released followed by two singles from the album Blind Eye and Queen Of Torture in February 1971. This was followed in quick succession by the albums Pilgrimage later in 71 and their third studio album Argus in 1972. Argus proved to be the biggest chart success of all of Wishbone's albums, reaching number 3 in the UK album charts and is also widely regarded amongst fans and critics as the band's most accomplished work. It was named Album Of The Year in the 1972 year-end issue of Sounds magazine and also Top British Album by Melody Maker. The success of Argus lifted Wishbone to a new level and they started to play larger venues as the headline act...... (full notes on sleeve).

You are an unconditional fan of WISHBONE ASH ? Check if you have all the collection.
If you just want discover a little more, the list below will help you.