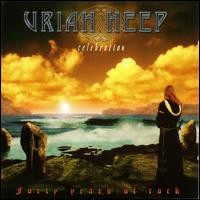 A bit cursory--that's the overriding impression of the majority of the CD portion of this 'Celebration'. There are moments, like 'Free 'N' Easy', where it comes across as if the band are on their final encore of the evening and are performing the song as fast as possible before saying the final 'good night' and getting backstage to down a few cold ones. It's not what you want to hear on a studio recording. Elsewhere, Bernie Shaw's voice seems a bit ragged, and it's hard to get on him too much about it as Heep tours continuously, but there is a definite lack of vocal finesse and care that makes large parts of this come across as a bit sloppy. This is most evident on 'Gypsy' which is too bad as musically it's one of the few truly inspired performances of the older material on the set. Phil Lanzon's Hammond solo is great and miles above his limp 'orchestral synth' solo he contributed to the 2001 version on 'Remasters'. Also, briefly going back to 'Free 'N' Easy', I was excited to see how this version of the band would interpret the mid-song trade off guitar solos of Mick Box and Ken Hensley that appeared on the original version from 'Innocent Victim'. Here it's replaced by a rather sloppy (that word again) and brief guitar/keyboard mish mash that is a real missed opportunity. The electricity that Hensley brought to this song with his slide is truly missed.

My concerns about Russell Gilbrook's drumming (which I brought up in my review of 'Wake The Sleeper') has sadly not been rectified here. If anything it's compounded, as he pounds away with little attention to what each individual song needs. Yeah, he can drum really, really fast and he does that a lot here. Like the overall impression of the studio part of this release, it lacks finesse and an attention to detail that is usually so much a part of a new Heep recording.

This was intended as a gift to the fans for 40 years of of support but is mostly captured in a form that suggests it was recorded in a one or two day session between tour dates. I believe Heep's new record label suggested this project, so in part I can overlook the rushed feel of it but, as recorded music lives on, as it were, this isn't a document that represents the Heep I know and love. The only real interest in the CD portion of this lies in the two new songs (probably cast offs from the 'Wake The Sleeper' sessions), 'Only Human' and 'Corridors Of Madness'. The former is a nice, upbeat and poppish ditty while the latter is a more epic feeling track with some groovin' Hammond, tense bass from Trevor Bolder and some good Mick Box guitar work. To a lesser degree, and of minor interest, are the versions of 'Bird Of Prey', 'Sunrise' and(to a lesser degree still) 'Lady In Black'.

Incidentally, if you want to hear this line-up (just replace Gilbrook for the great Lee Kerslake) tackle a more varied track listing than found here, and with, for the most part, more commited performances, check out 2001's 'Remasters'. Outside the two new tracks (which are worthwhile) the Heep magic of old is in short supply on this CD. Come to think of it, for yet other superior examples of well known Heep songs from the past tackled by this line-up (just sans Gilbrook), listeners would be better served checking out 'Acoustically Driven', in which songs from the Byron to Shaw eras are covered in an acoustic atmosphere with some interesting guest performers and unique, carefully considered arrangements. Time constraints, I think, snuffed out the possibility of experimenting and finding new dimensions to these well worn tunes making it feel at times like we are listening to a cover band. Oh yeah, I do believe that with this release, Uriah Heep have commited 'July Morning', 'Gypsy' and 'Easy Livin'' to tape a combined 4,135,625 times. Officially.