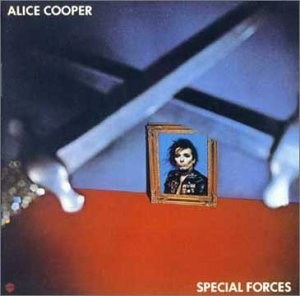 One of his most daring, interesting and entertaining albums. I bet it was hard for the fans to digest this one back in '81, as it was so different from his 70s stuff. But now, after almost 30 years it doesn't really matter.
We find Alice exploring some new territories here: this is mostly, erm, 'punkyish new wave' stuff, with some hard rock and just a little bit of pop catchiness on the top of it. And it works perfectly! Damn, how enjoyable this album is! How full of interesting tunes and vocal hooks! Sounds like Alice was having fun recording this one, despite his alcoholism which almost killed him around that time. Almost every track is worth mentioning for some reason - Who Do You Think We Are is a great opener, it rocks pretty hard and has a punk feel to it. Next one, Seven & Seven Is, is a crazy little song, again some punk in it, and it's just hillarious, mostly because of Cooper's singing ('mmm-bep bep'?). Prettiest Cop on the Block is ok, but mostly because of the lyrics. In 'Don't Talk Old to Me' the punk rock spirit is expressed also through the lyrics, but musically it's not VERY interesting. Still deserves a coouple of listens.
Next up is the 'live' rendition of 'Generation Landslide'. 'Live', because it was recorded entirely in the studio, with some crowd added here and there. It's ok, not as good as the original version, but I guess Cooper thought it fit the conception of this album well. I think it doesn't sound too much out of place. Although the album wouldn't really suffer without it... 'Skeletons
in the Closet' is one of my favourites here, very nice sound, melody and
overall atmosphere. 'You Want it You Got it' is yet another punkyish tune.
'You Look Good in Rags' is my personal favorite, great, catchy melodies and
vocals - this one makes me want to dance! Damn good song. 'You're a Movie' stands
out, too - and oh, how I love the lyrics here, you just have to listen to this! The last song, 'Vicious Rumours', rocks pretty hard and probably gets as close to 'pure punk' as possible. A good song to close the album.
And what about the lyrics? Well, Alice was toying with some strange,
para-military fantasy and the topic is present in some of the songs here ('Who Do You Think We Are', 'Prettiest Cop on the Block', 'You're a Movie'). In general,
the lyrics are funny, clever, and really enjoyable (to me at least). But it
was always so with Alice. He is a really gifted lyricist.
All in all, this is an album for listeners with open minds. Don't expect anything specific, especially nothing in the vein of his 70s stuff - you're bound to be satisfied, if only you can give this album a couple of spins.