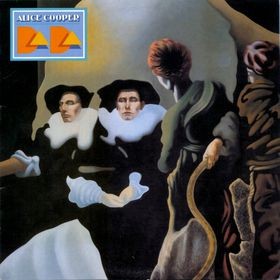 Now here's an interesting little album.  Alice's final foray into New Wave is a creepy, weird concept album about a cannibal.  I avoided this album for years due to my disappointment with 1981's Special Forces and 1982's Zipper Catches Skin.  Finally, after giving the album a couple of listens, it's actually quite good.

Opener 'Dada' is a spoken-word intro with spooky background music courtesy of Bob Ezrin, though after this song the album dives headfirst into a catchy New Wave pop tune, 'Enough's Enough'.  From there it goes all over the place, sometimes brilliant (Alice's bizarre sense of humour is evident in 'I Love America'), sometimes just plain bad ('Dyslexia' is awful).  The best song is saved for last, however, with 'Pass the Gun Around', a song that recalls his early 70s work.