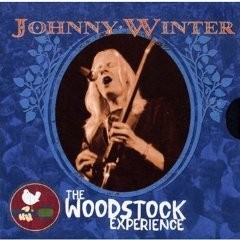 1. I'm Yours And I'm Hers
2. Be Careful With A Fool
3. Dallas
4. Mean Mistreater
5. Leland Mississippi Blues
6. Good Morning Little School Girl
7. When You Got A Good Friend
8. I'll Drown In My Own Tears
9. Back Door Friend
Disc: 2

Among white blues singers of the 1960s, there were some whostudied the music so intently they amazed even the genre's creators with their technical mastery. A select few, however, seemed to be born oozing authenticity, sounding just as soulful as the greatest black bluesmen while forging a completely new sound. Johnny Winter belonged in the second category. A long-haired hippie albino, he astounded initially skeptical listeners with his Howlin' Wolf-like vocals and wild Johnny Guitar Watson-esque guitar stylings. THE WOODSTOCK EXPERIENCE showcases Winter's first taste of national exposure, first with his 1969 self-titled debut album, and then with his set at the Woodstock festival later the same year. The latter recording is the revelation here--a tornado of raging slide guitar and shouted vocals that sounds as if a late nightLone Star State roadhouse gig has been magically transported to the upstate New York farm. With several tracks clockingin at over 10 minutes ('Mean Town Blues', a hellacious Edgar Winter-led jam on 'Tobacco Road'), the album showcases Johnny at his freest and most explosive.