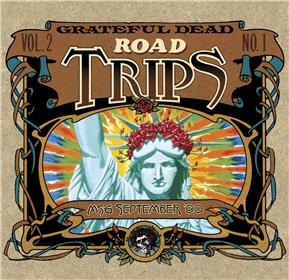 The newest volume of Road Trips is drawn from the band's famous six-show run at Madison Square Garden in the late summer of 1990. Two months after the tragic death of Brent Mydland, the band rallied to reaffirm its vitality, and opened the door to new possibilities. Filling Brent's big shoes on keys were Vince Welnick, formerly of The Tubes, who added his high vocal range and fluid playing style to the mix, and Bruce Hornsby and his truly grand piano; together they would occupy a large chunk of stage left. The powerful impact of this combination was immediately clear, as the Garden crowds enthusiastically embraced the new energy.

The songs on this Road Trips release are culled from the final three nights (September 18th, 19th and 20th) in New York, and they capture a band miraculously coming together in search of the elusive Grateful Dead X-factor. There are blistering jams on 'Dark Star,' 'Playing in the Band' and 'Let It Grow' that sound unlike any played by previous incarnations of the band; this is a new thing. But with plenty of the old magic: You can really hear the New York crowd singing along to 'Uncle John's Band.' And the Garden practically lifts off the ground and flies away during 'Truckin'' and 'Turn on Your Lovelight.' It's two-and-a-half hours of mind-twisting and soul-shaking brilliance! See the complete track list and recording dates below. All discs are meticulously mastered to HDCD by Jeffrey Norman, and the set comes with a 16-page booklet with plenty of photos and an essay by Dan Levy.