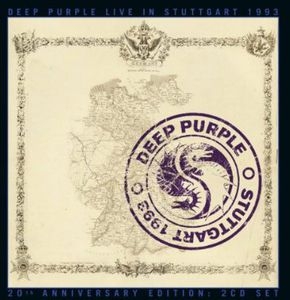 This line-up originally trod the boards from 1969 until 1973, before reconvening from 1984 until 1989, and then again for one last hurrah together in 1993, with the release of their prophetically titled The Battle Rages On. This live album captures that 25th Anniversary tour. Despite the fractious nature of the band, particularly between Blackmore and Gillan, many consider the shows performed by the band on this tour to some of their greatest, and this gig on the 16th October show at the Schleyerhalle in Stuttgart, Germany to be amongst the best. Nestled with such perennial Purple classics as Highway Star, Lazy and Space Truckin'', all originally from the Machine Head LP, across two CDs, the band also found time to include some firm favourites, such as Perfect Strangers, Child In Time, Hush and the title track to The Battle Rages On. The set also included a couple of surprises, including Anyones Daughter, lifted from 1971s Fireball, as well as the bands take on the Rolling Stones Paint It Black. Unsurprisingly, the album is finished off with Purples best loved track, and possibly one of the best known guitar riffs, Smoke On The Water. This 20th Anniversary edition now features a 4,000 word essay detailing the events, and drama, that unfolded during the 1993 tour