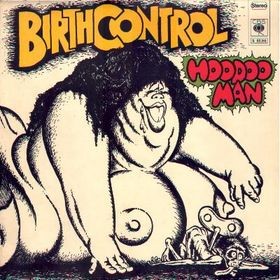 This third album by the band finds them continuing in the same vein and similar quality as 'Operation'. The template is the same, Hammond organ driven hard rock with a Progressive leaning. Back in the early Seventies, there were a lot of German bands playing this exact style of music, many of whom made albums that are still revered to this day. This is no exception and is packed full of great riffing and memorable melodies.
From the second album the major change in personnel sees the previous organist leave, his place being taken by Wolfgang Neuser. In terms of the heavy Hammond riffing there's little noticeable difference but where the previous incumbent employed his classical training throughout and paid regular homage to Beethoven on 'Operation', this is more straightforward rock organ playing. It is, I have to say, no less accomplished, certainly from within this rock idiom. He also uses some synths and there is a great, extended church organ section in the title track.
This album is notable for the inclusion of the wonderful 'Gamma Ray', a track that has become somewhat of a signature song for them. It has every right to play that role as it's a superb song that I never tire of hearing, with a highly memorable riff. There is great interplay between Hammond and wah-wah guitar and even a good drum solo! The latter of which stays within the beat of the track and does not fall into the usual trap that drummers fall into - that of believing they can inject their own personality by going into an extended improvisation and thus boring the pants of the listener. I'd like to make a special mention of drummer/vocalist Bernd Noske who, aside from his not insubstantial drumming skills, must be one of the very best vocalists of the last forty odd years. He has a little bit too much in the way of vibrato and I can well understand if people dislike his voice purely down to this element, rather as I cannot listen to Maria Callas, but he has a powerful and distinctive voice and always hits the notes. It's worth noting that he still fronts (backs?) the band to this day and his voice has barely diminished in it's efficacy.

The only point of dissatisfaction is the track 'Kaulstoss' which, as others have mentioned, is horrible boogie rock, the band's equivalent to Benny the Bouncer' and just as awful. It's inclusion is made even more incongruous by the quality of the rest of the material. One track that last only just over two and a half minutes is not going to affect my overall impression, and thus rating, of what is a superb album.

Bonus tracks:
Included are two versions of 'Gamma Ray' which come from the same single - probably just an A-B split. Of the rest, 'Nostalgia' is a basic quick rock blues number with piano and slide guitar but is still quite a good song. Finally, there are two very good live tracks - 'Hope' and 'She's Got Nothing on You'. The former is a non album track and really good, fitting right in with the style of the studio album. The latter, another signature track from 'Operation', is another great performance and features yet another excellent and memorable riff. The audio quality of the two live tracks is of very good bootleg, with some echo but no distortion. It sounds like they were recorded from the back of the auditorium.

You are an unconditional fan of BIRTH CONTROL ? Check if you have all the collection.
If you just want discover a little more, the list below will help you.