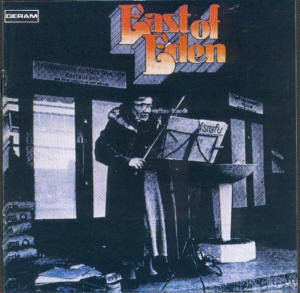 East of Eden's second album had to be one of the least commercial albums ever to enter the British Top 30, as well as one of the most stylistically diverse (or inconsistent, depending upon your mindset). The term 'progressive rock' fit as well as any, yet much of it was rather along the lines of early jazz-rock fusion, with lengthy hard-to-hum instrumental passages. But there was a lot of Eastern influence as well, especially on those pieces that highlighted Dave Arbus' violin and flute. Some of the absurdist humor along the lines of Frank Zappa and the Soft Machine makes itself known too, though East of Eden were more serious than Zappa and less whimsical than the Softs. Indeed, it's a rather sober affair that sometimes approaches gloominess, and like the late '60s/early '70s Soft Machine, it's more oriented toward virtuosic instrumental sections than vocals and lyrics. Then there's some out and out weirdness, like the squiggly tape manipulations/musique concrète of 'Uno Transito Clapori' and the eerie backwards-sounding effects that run through some of 'Habibi Baby Beast of Sweden.' The surreal touches sometimes seem self-conscious, not least in the song titles, i.e. 'Traditional: Arranged by East of Eden' (which is not traditional, but an East of Eden original). It all leaves the impression of an intellectual band who can play well and play in lots of different styles, but don't quite excel at anything as far as raw compositional ability.