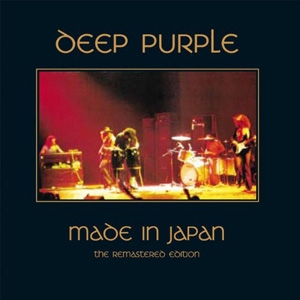 Made in Japan (2 CD*remastérisé*édition deluxe)

Recorded over three nights in August 1972, Deep Purple's Made in Japan was the record that brought the band to headliner status in the U.S. and elsewhere, and it remains a landmark in the history of heavy metal music. Since reorganizing with singer Ian Gillan and bassist Roger Glover in 1969, Deep Purple had recorded three important albums -- Deep Purple in Rock, Fireball, and Machine Head -- and used the material to build a fierce live show. Made in Japan, its selections drawn from those albums, documented that show, in which songs were drawn out to ten and even nearly-20-minutes with no less intensity, as guitarist Ritchie Blackmore and organist Jon Lord soloed extensively and Gillan sang in a screech that became the envy of all metal bands to follow. The signature song, of course, was 'Smoke on the Water,' with its memorable riff, which went on to become an American hit single. But those extended workouts, particularly the moody 'Child in Time,' with Gillan's haunting falsetto wail and Blackmore's amazingly fast playing, and 'Space Truckin',' with Lord's organ effects, maintained the onslaught, making this a definitive treatment of the band's catalog and its most impressive album. By stretching out and going to extremes, Deep Purple pushed its music into the kind of deliberate excess that made heavy metal what it became, and their audience recognized the breakthrough, propelling the original double LP into the U.S. Top Ten and sales over a million copies. On November 17, 1998, Warner ArchivesRhino issued 'the remastered edition' of the album, a two-CD set that added more than 20 minutes of encores on a second disc that contained 'Black Night,' previously released only as a European B-side, and versions of 'Speed King' and Little Richard's 'Lucille' that were previously unreleased.