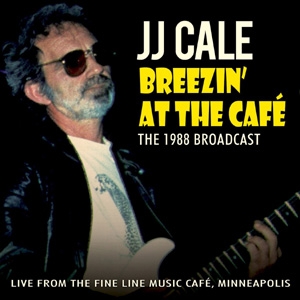 Breezin' At The Cafe

The sad and wholly unexpected news that musician, composer and performer - and the man who was ranked as highly as Jimi Hendrix as an electric guitarist by no less a talent than Neil Young) - J.J. Cale had passed away following a fatal heart attack sent shock-waves through the music community recently. Cale was the real deal when it came to the over-used phrase 'musicians' musician'. J.J. Cale begun his recording career in the late 1960s, but following a lack of any recognition towards the end of the decade was planning to give up playing. Then he heard a version of his song 'After Midnight' on the radio, performed by no other than Eric Clapton and his mind was changed. Instead he put out a number of quite remarkable country-tinged, delightfully laid back collections of songs throughout that decade and composed classic after classic - 'Cocaine', 'Magnolia', 'Crazy Mama', the list is endless - which he both recorded himself and gave to others to do likewise. Clapton went on to record many of J.J.'s finest numbers. This radio broadcast, transmitted live from the 'Fine Line Music CafÃ©' in Minneapolis on 5th September 1988, finds J.J. in spectacular form. Despite, at this time, not having released a studio album for five years, he performs a rip-roaring set complete with full band and shares vocals on a number of tracks with veteran Cale band member and more recently, his wife, Christine Lakeland. A musician and songwriter in her own name too, Christine gets to perform three of her own compositions during the show. The set-list played on this glorious late summer evening features many of the Cale classics mentioned above and a host of others to make for a show of barely paralleled excellence. However, three bonus cuts are included here, going back to a previous radio broadcast from the mid-1970s when Cale performed at the Cain's ballroom in his home town of Tulsa on New Year's Eve 1975. While the man is no longer with us the music he left behind will go on forever.

You are an unconditional fan of J.J CALE ? Check if you have all the collection.
If you just want discover a little more, the list below will help you.