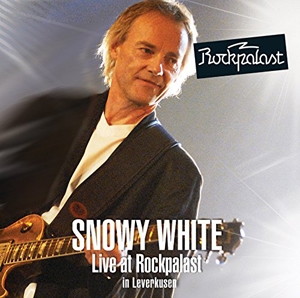 Snowy White is one of the UK's most acclaimed and accomplished guitarists. His stellar career includes appearances and recordings with major artists as diverse as Pink Floyd, Al Stewart, Cockney Rebel, Cliff Richard and Thin Lizzy amongst many others. He has also been a successful solo artist in his own right since the mid-1980s. Previously on Rockpalast with Irish hard rockers Thin Lizzy in 1981, here he returns in 2007 as front man with his White Flames Band, whose recording career began in 1996. The tight backing band of talented Dutch musicians Juan Van Emmerloot (drums) and Walter Latupeirissa (bass), together with the seasoned Jeff Beck/Chris Rea sideman Max Middleton (keyboards), provide the perfect backing for Snowy's distinctive fretwork. Highlights include title track of his 1996 album No Faith Required' and the encore I Loved Another Woman - Snowy's tribute to legendary Fleetwood Mac's Peter Green, his mentor and key influence. We augment this with a show from 11 years earlier. This was originally played as a three-piece at the Crossroads - Blues & More Blues Fest, Leverkusen, in 1996 - the year the first White Flames band album No Faith Required was released. However, the show was not broadcast, so this newly restored, rough cut version is a collectable bonus feature. A highlight of the 1996 festival performance is the opener, another Peter Green song, Looking For Somebody. Expertly restored and re-mastered. Superb vision, outstanding sound. The best in the business !

You are an unconditional fan of SNOWY WHITE ? Check if you have all the collection.
If you just want discover a little more, the list below will help you.