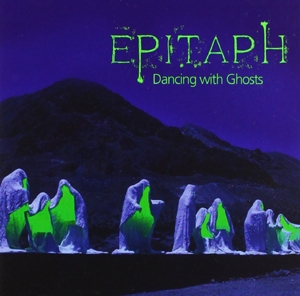 For four decades, they have been a known quantity on the rock music scene. They have written their own chapter in music history. They've been instrumental in coining a whole era, looking back at 40 years on the road. They were the first German band to tour the US, performed three ‘Rockpalast’ TV shows which were broadcast all over Europe, have brought out 13 albums to date. And have enjoyed the admiration of a large fan community all over the world.

Dancing With Ghosts presents Epitaph in their usual top form. Their 10 new titles are marked by Epitaph’s unique twin lead guitar sound – more rocky than ever, but always faithful to themselves. A truly impressive album – with crisply rocking rhythms, excellent guitars, intricate vocals and perfect arrangements, Epitaph corroborate their reputation as a first-rate, timeless rock act.

Cliff Jackson (git., voc.), Bernie Kolbe (bass, voc.), Heinz Glass (git., voc.) and Achim Poret (drums, voc.) recorded Dancing With Ghosts between September 2008 and March 2009 at the Cliffstudio in Schleswig-Holstein. Following their album, ‘Remember the Daze’ (March 2007), which was celebrated by the press as a phenomenal comeback, Dancing With Ghosts sees the quartet rely on the tried and tested collaboration with sound experimentalist, Roger Wahlmann.

There can be no doubt: Epitaph are set to continue on their successful route with their new album release, Dancing With Ghosts. Mind you, what else can you expect from so much creativity in combination with the band’s amazing enthusiasm. EPITAPH guarantee a

diverse album in Dancing With Ghosts, which even features an acoustic number, entitled ‘Ride on Storm’.

Cliff Jackson: “I think we have succeeded on Dancing With Ghosts in remaining authentic and faithful to our roots and identity, while never standing still and continuing to evolve as a band.”

Dancing With Ghosts WITH GHOSTS is the best present we could have made ourselves. After all we’re celebrating four decades of Epitaph this year!”

You are an unconditional fan of EPITAPH ? Check if you have all the collection.
If you just want discover a little more, the list below will help you.