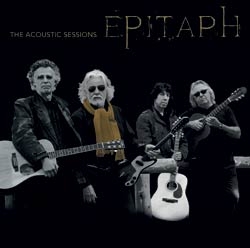 Most Epitaph songs are written on acoustic guitars anyway, so with ‘The Acoustic Sessions’ we are basically going back to our roots. - Cliff Jackson

The band has recorded 13 songs for the ‘Acoustic Sessions’ and it sounds as though Epitaph have managed to close a gap in their history with this album. A gap that nobody perceived until the album was released.

Epitaph have arranged this unplugged cross section of their discography in such an excellent, exciting manner that the pace does not relent for a minute. They are joined by guest instrumentalists such as Klaus Henatsch (Nektar), Agnes Hapsari Retno on the grand piano and Tim Reese on the violin, who all add new elements to the band's sound spectrum.

With songs from their début album as well as from ‘Outside The Law’ and ‘Return To Reality’ and also from their last studio albums ‘Remember The Daze’ and ‘Dancing With Ghosts’, the listener is treated to a fascinating trip through the band's back catalogue. Jimi Hendrix appears twice in the repertoire with ‘Villanova Junction’ and his version of Bob Dylan's ‘All Along The Watchtower’ and Epitaph give both songs that unique Epitaph treatment.

Bonus tracks include the unplugged version of ‘In Your Eyes’, recorded live in concert in the Capitol in Hanover and the radio version of ‘Looking For A Friend’.

You are an unconditional fan of EPITAPH ? Check if you have all the collection.
If you just want discover a little more, the list below will help you.